The picture below shows a list of the tonic triads for each of the twelve major keys. A tonic triad is a chord made up of the first, third and fifth degree of the scale. For example the scale of C major is C, D, E, F, G, A B, C. The first degree (or first note) of the scale is C, the third is E, and the fifth is G. Each tonic triad shown below is in root position. This means that the first degree of the scale is in the bass (the lowest note). The notes of each chord can be rearranged (inverted) and played at different octaves for different musical effects.

If you know the major scales, you can work out the tonic triad for each one just by taking the 1st, 3rd and 5th degree of the scale, as described above. However, if you aren't familiar with all the scales and keys, this method doesn't work so well, and you can use an alternative method described below. Jump to alternative method.

The chords beginning on black keys can also be named by their enharmonic equivalents. In other words: D flat major can also be called C sharp major, F sharp major can be called G flat major etc. However, in the picture I have named the chords by their most common and logical enharmonic equivalent name. E.g. it is more logical to say “D flat major” instead of “C sharp major” because the note names of the scale of D flat major are simpler to work out than those of the scale of C sharp major, even though the pitches are the same.
You can turn each of the major chords above into a minor chord by simply lowering the middle note by a semi tone, as pictured below. A semi tone is the distance from one key to the next adjacent key on the piano, i.e. the smallest possible interval between two notes. E.g. a C major chord becomes C minor if you change the E to E flat, and a D major chord becomes D minor if you change the F sharp to F natural, etc. For more information on the letter names of the keys on the piano, see the keyboard diagrams on this page: Piano scales
Here is a diagram showing the tonic triads in root position for each of the twelve minor keys: 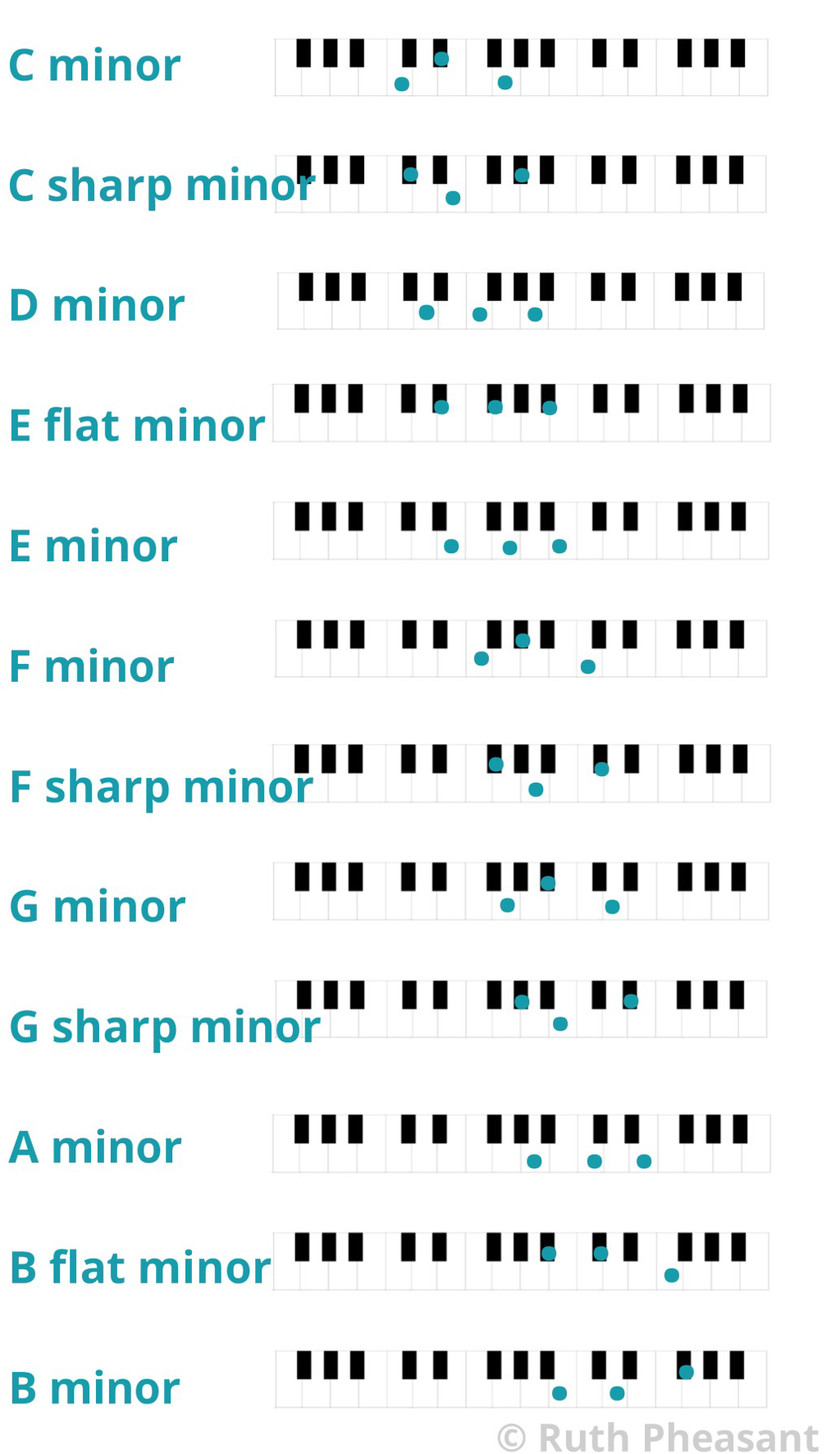 ​If you don’t know the relevant scales or key signatures, you can still work out any major or minor triad, but using a different method, which is as follows.


For major chords:
For minor chords:
Take a major triad and just lower the 3rd (middle note) by a semitone, as before. This results in the root and 3rd being three semitones apart, and the 3rd and 5th being four semitones apart.

Examples:
E.g. a C major chord is C E G; because C and E are 4 semitones apart; and E and G are 3 semitones apart. In pop music, the chord symbols for major triads are usually shown by the letter name alone, so “C” means C major.

Diminished chords:
Taking this idea a little further, if you create a chord where all the notes are 3 semitones apart, you get a diminished chord. This is often shown by a superscript “o” next to the letter. E.g. Cº would be C diminished, which  would be C Eb Gb.

Augmented chords:
If you create a chord where all the notes are 4 semitones apart, you get an augmented chord, and this is often shown by a plus sign next to the letter. E.g. C+ is C augmented, and would be C E G#.

Inversions:
Once you have worked out the three notes of a triad, you don't have to be limited to playing it in root position. You can take the three notes and put them in a different order, and this will give you an inversion. Inversions can help you to move more smoothly from one chord to the next. E.g. if you play a C major chord as you worked it out using the method above; i.e. with C as the bottom note, E as the middle note and G as the top note; this is in root position. If you rearrange the notes so that E is in the bass, G is the middle note and C is on top, you have an inversion. You can read more about inversions in the following article: ​Chords, Roman numerals and inversions.
Articles main menu
More piano tutorials