Below I have shown the notes and correct fingering for several common scales, both hands. I have also provided video demonstration for each one. Practising scales on the piano in the correct way can vastly improve many areas of your general musicianship, including technique, musical ear and understanding of theory. Read more about why it is a good idea to practise scales.
Before we get to the scales, here is a reminder of the finger numbers of each hand:
Also a reminder of the notes of the grand staff, and the letter names of the black and white keys on the piano keyboard: 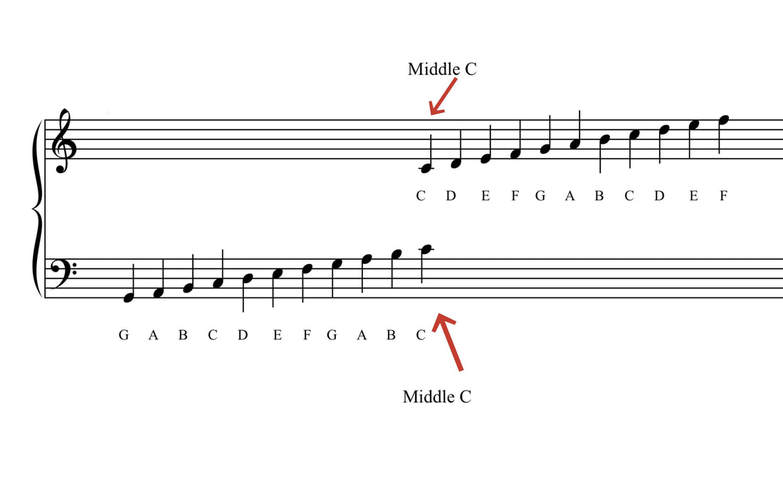 The key of C major has no sharps or flats. This means that the scale only uses white keys. The notes played are C D E F G A B and so on:

G major has a key signature of one sharp - F sharp. This means that most of the notes played will be white keys, apart from one - F#. You will play F# instead of F. The notes played are G A B C D E F# and so on:

D major has a key signature of two sharps - F sharp and C sharp. This means you will be playing two black keys for each octave of this scale. The notes are D E F# G A B C# and so on:

A major has a key signature of three sharps - F sharp, C sharp and G sharp. This means that each octave of the scale will include three black keys. Notice how each time we add a sharp to the key signature we use the previous ones plus another one that is 5 letter names up from the last one - an interval of a 5th. (C to G forms an interval of a 5th - count the C and the G plus all the letters in between: C D E F G makes 5 notes, so this is known as a 5th.)
​The notes for the A major scale are A B C# D E F# G# and so on:

The key of E major has a key signature of four sharps - F sharp, C sharp, G sharp and D sharp. This means that for every octave you will play four black keys. The notes played are E F# G# A B C# D# and so on:

Minor scales
Chromatic scale
You can find a video demonstration of every major scale and explanation of how to work out the key signature for each one following the cycle of fifths here.
Learn about different kinds of scales in the following tutorial:
Modes - how to work out all modes from ionian to locrian
More tutorials