How to Work Out Major Keys and Key Signatures.

Music Theory - The Cycle of Fifths

​The extract of music above is in the key of C major. We can see that there are no sharps or flats in the key signature.
C major scale video demonstration

To work out key signatures with sharps, follow this method:
G Major:
For the key signature with one sharp (F sharp), go up a *perfect 5th from C and you get G. So G major has a key signature of one sharp, that sharp is F sharp. See the picture below showing an extract of music in G major.

G major scale
*An interval of a 5th is a distance of 5 letter names, so C to G is a 5th because you count C,D,E,F,G. There are different kinds of 5ths depending on whether you sharpen or flatten the top or bottom note of the interval. To get a perfect 5th, ensure that the top and bottom notes are 7 semitones apart. In the picture below, each green arrow shows a distance of a semitone. (A semitone is the shortest distance between two pitches or keys on the piano.) 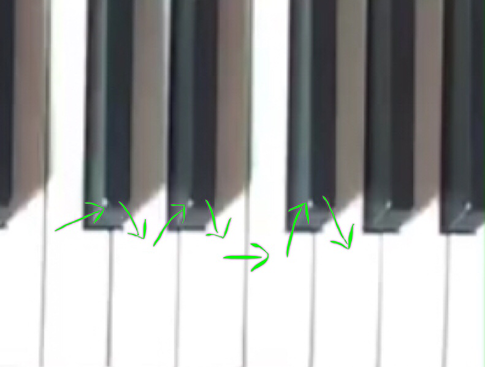 D major scale
A Major:
For the key signature with three sharps, go up a perfect fifth from D and you get A. So A major has three sharps. The first two sharps are the same as previously: F sharp and C sharp. To work out the third sharp, go up a perfect 5th from C sharp and you get G sharp. So A major has F sharp, C sharp and G sharp in the key signature, in that order. See the picture below:

A major scale
E Major:
For the key signature with four sharps, go up a perfect fifth from A and you get E. So E major has four sharps. The first three sharps are the same as previously: F sharp, C sharp and G sharp. To work out the fourth sharp, go up a perfect 5th from G sharp and you get D sharp. So E major has F sharp, C sharp, G sharp and D sharp in the key signature, in that order. See the picture below:

B major scale
F sharp major:
The major key with six sharps is F sharp major, because F sharp is a perfect fifth (7 semitones) above B. Those sharps include the same 5 sharps as in B major, plus one extra. To work out this extra one, go up a perfect fifth (7 semitones) from A sharp - you get E sharp. (This is actually a white key on the piano, and the same key as F, but we don’t call it F because we’ve already got F sharp in this key, and in a major scale we don’t have two different notes with the same letter name. So we call it E sharp.) So F sharp major has these sharps in the key signature: F, C, G, D, A and E. See the picture below

A flat major scale
D Flat Major:
The same principle applies to D flat major which has five flats, and those five flats are B, E, A, D and G: 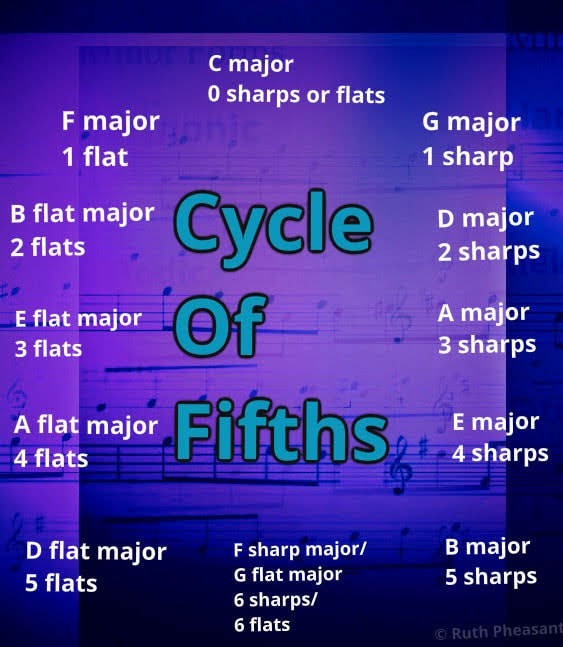 The cycle of fifths
Note: In order to make key signatures easier to read, the sharps and flats are generally arranged in a zig zag pattern. So you choose the octave in which to write the sharp or flat according to this pattern. For example, for a key signature of four flats (A flat major with B flat, E flat, A flat and D flat), even though you can think of D flat as being a fifth below A flat (in order to work out which note to flatten), in the key signature the flat sign is written on the higher D line of the stave, instead of the lower D space. ​