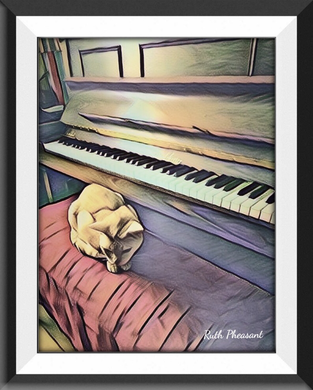 Music can be many things. It could be considered to be a craft, a science, a language, entertainment, a means of personal development...
Notably, it is an art form.

The definition of art is the expression of creativity, imagination, concepts, skills and emotions. Art is often designed to have aesthetic appeal and is frequently influenced by sociological circumstances of the time. Music is no exception. Art is commonly thought of as paintings and drawings, however it can take many forms including sculpture, poetry, literature, photography, theatre, dance...and of course - music.

Art forms can be used as a means of representation. For example a painting may represent an object, person or landscape, whether the painting is abstract or realistic. In a similar way, music can metaphorically paint a picture. For example in the piano piece L'orage (The Storm) by Burgmuller, the stormy weather is depicted by turbulent rhythms, forceful dynamics and dramatic presentation of harmonies; and crashes of thunder are represented by sudden loud notes. Music can also represent an emotion such as in Schumann Romance No. 2 for piano, where tenderness, affection, love and romance are effectively communicated by the use of lyrical melodies, gentle expressive qualities and warm rich harmonies.

Art forms are also often used to express technical skill, both of the creator of the work of art, and the performer. Bach music is a good example of this. Bach's compositions demonstrated his skill with creating elaborate counterpoint, and his music was also often used to display the technical skill of the musician playing it. An example of this is Bach's Prelude No. 21 which was written in the style of a Toccata - a piece designed to demonstrate the technique of the performer.