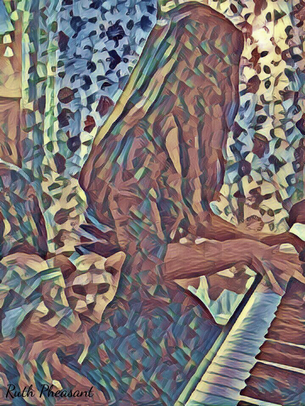 Classical is a word often used to describe Western art music as a whole when distinguishing it from genres such as pop, folk and jazz. However, the Classical period is one of a few eras within western art music. These eras include Baroque, the aforementioned Classical era, Romantic, and twentieth century.

Some Stylistic features of Baroque music include the following:

•Use of polyphonic textures - this is where two or more melodies are being played at the same time, often in the form of a canon or fugue. This kind of texture can be very good for developing technique in pianists because Baroque keyboard music can often consist of four parts (four simultaneous melodies), with one hand being required to play two parts at a time. One finger of one hand may be required to hold long notes, while other fingers of the same hand are playing a faster series of notes due to the fact the two parts being played by one hand may have a different rhythm. This kind of part playing is a tremendous test of coordination both between the two hands, and within one hand. Fine control and dexterity is required for playing more than one part in one hand, and the fingers must be able to work independently. Another feature that contributes to development of technique is the tendency for a lot of Baroque keyboard music to be written in the style of a toccata - which is a fast piece designed to show off the agility, dexterity and virtuosity of the performer.


• Baroque music tends to feature elaborate embellishment of melodies with ornaments such as trills, turns, mordents, acciaccaturas and appoggiaturas. During the Baroque era performers would tend to improvise these ornaments to decorate the basic outline of the melody that was presented to them by the composer. It became a tradition to decorate Baroque music in certain ways, so nowadays the ornaments are usually written on the music in some way. Despite the fact that a musician may be following written instructions for ornamentation, they still tend to have an improvisatory feel which can help to develop a musician's understanding of expression and phrasing. Also, ornaments are often very fast and need to be delicately played, so this is another factor contributing to development of technique and coordination.

Some features of piano music from the Classical period include the following:

•Homophonic texture - where there is a distinct melody in one hand with a chordal accompaniment in the other hand. The chordal accompaniment may consist of broken chord patterns, such as an Alberti bass. This is a very distinctive pattern where the lowest note of the chord is played first, then the highest, then the middle, then the highest again. This pattern is repeated over and over forming a kind of ostinato (repeating pattern), but varying the actual chord used.
Again, an Alberti bass is very good for developing coordination and fine motor control due to the dexterity needed to play the right notes in the right order, frequently at a high speed. A light touch is needed so as not to drown out the melody, and this develops another aspect of technique on the piano keyboard - control of pressure and velocity.
Good coordination also comes into the need to play the chordal accompaniment quieter than the melody, so that the melody sings out and is emphasised. Playing one hand louder than the other is a very challenging feat of coordination. Even when the chordal accompaniment is not made up of broken chord patterns such as an Alberti bass, the coordination challenge of playing the accompaniment hand quieter than the melody hand is still there. In fact, a different challenge is presented by chordal accompaniments consisting of block chords. The chords need to be played neatly so that all the notes go down at the same time - this requires and develops good control. The chords also need to be played gently if they are not to compete with the melody - it is difficult not to play block chords too heavily. Certain notes of the chord may need to be brought out more than others - this requires good muscle control. Working on fine tuning all these aspects of chordal accompaniments develops many different layers of coordination and control.

Another part of musicianship that can be developed by playing Classical chordal accompaniments is recognition of chords and harmonic sequences. This understanding of chords and how they can be inverted, broken up into different patterns, and sequenced can be applied to many other styles of music.

Some composers of the Romantic era include Chopin, Schumann, Schubert, Mendelssohn, Tchaikovsky and Brahms.

Some stylistic features of Romantic music include:

•Lyrical melodies - again this can help to develop coordination between the hands as the melody needs to sing out above the accompanying hand. Learning lyrical melodies can also help to develop your understanding of phrasing and shaping within music if you are able to imagine the melody being sung. This helps to bring attention to the fact that a melody is a way of communicating an idea or mood, just like a song.

• Passionate expression in the form of varied dynamics, freedom of tempo, contrasts and gradations, development of harmonies, dissonances, chromaticism etc. Romantic music was written to be much more expressive of emotions and sentiment than earlier music. This can help to develop understanding of how music is structured and designed to communicate ideas, and helps you to see beyond the technicalities.

•Just like earlier eras of western art music, certain composers wrote pieces that were designed to show off the virtuosity and brilliant technique of the performer - e.g. Franz Liszt. So, as mentioned earlier (regarding Baroque music) tackling one of his pieces would help develop good technique if approached in the right way. Chopin is another example of a composer who wrote technically challenging passsages of music that would display the virtuosity of the performer.

Some composers of the twentieth century include Debussy, Chaminade, Ravel, Benjamin Britten and Vaughan Williams.

Some features of twentieth century art music include:

• Moving away from the structures, forms and harmonic traditions of earlier music. This helps to develop versatility and freedom of expression, as well as an understanding of more complex patterns and harmonies.

• Composers like Debussy and Ravel created an impressionistic style of music. Playing this kind of music helps to develop the ability to create atmospheric sounds and convey moods with subtlety, as well as to understand more abstract ideas.

•The piano music of Chaminade often combines the challenges of lyrical expressive melodies common in Romantic music; chordal accompaniment patterns seen in similar forms in both Classical and Romantic music; greater freedom of form and harmonic development than earlier music; and some difficult fast passages that can showcase accomplished technique, as featured in many styles of western art music.

​In conclusion, even if your main musical interest is pop, jazz, blues etc, you can benefit greatly from a classical training because the skills you will acquire will make it easy for you to pick up almost any genre of music.


You may also be interested in my articles on performance directions and getting more out of your piano practice.