How to Play Arpeggios on the Piano

2. They improve the flexibility and range of motion of the fingers and wrists.

3. They help you to learn and recognise commonly used chordal patterns. This makes it easier for you to sight read music fluently - recognition of chordal patterns used in music means you can quickly pick up on the shape of whole chunks of music, rather than having to slowly work out each individual note without having any awareness of how each note is related to the others. Recognising chordal patterns and chord sequences also makes it easier to memorise music.
Arpeggios are based on a chord - the tonic triad. This means they use the first, third and fifth note of the scale of the same key. So, a C major arpeggio would consist of C, E and G. This is because a C major scale consists of the notes C, D, E, F, G, A, B and C, in that order. The first, third and fifth notes in that sequence are C, E and G.

In an arpeggio, these three notes are played in a specific pattern: For C major one octave this would be C, E, G ascending, then the next C an octave higher than the first, then the sequence is repeated backwards in order to go back down to the start. Two octaves is done by continuing this sequence of C, E, G, C, E, G upwards until you reach the C two octaves above the starting note, then the sequence is followed backwards to return to the starting note. 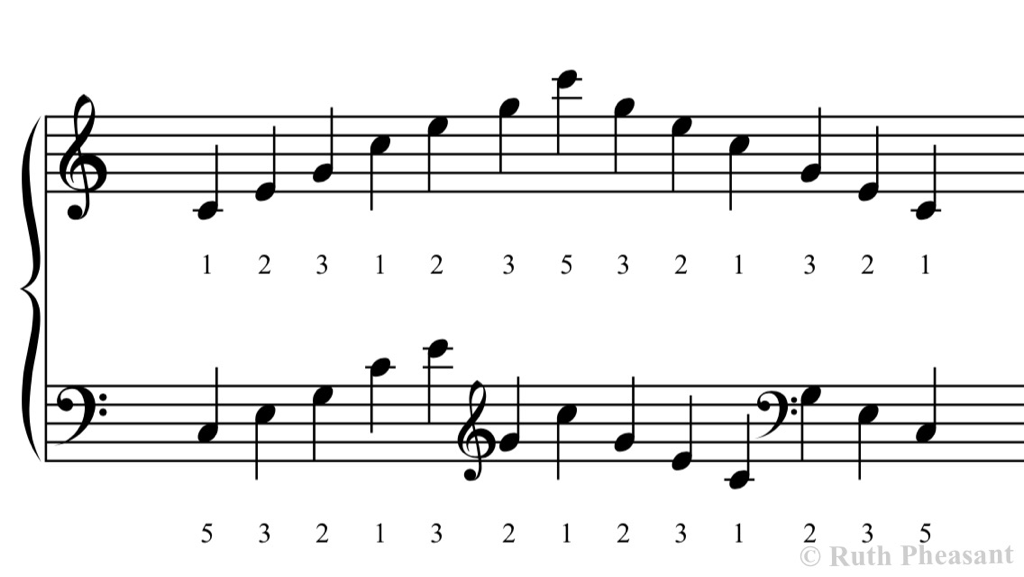 Below I have demonstrated a few more arpeggios. They all follow the same pattern of using the first, third and fifth notes of the scale. You can see the corresponding scales here: Piano scales tutorial

For a D major arpeggio, you play D, F sharp, A. So there is one black key in this arpeggio.

In an A major arpeggio you play A, C sharp and E, so again there is one black key. When piano students first start learning this arpeggio there is often some awkwardness during the descending phase of the right hand when the third finger has to go over to E. It can be helpful to just practice this movement between the thumb on the A and the third finger going over to E lots of times in order to get the hang of it. Taking out difficult parts of the arpeggios and practising them repetitively can be of great benefit.

E major consists of the notes E, G sharp and B, so one black key again.